Gigabit PON (GPON) is currently the most widely deployed TDM PON system around the globe. Some operators are migrating BPON to GPON, or still rely on the performance of GEPON. The main features of a TDM PON network are the fiber architecture, which is based on a power splitter, and the time multiplexing of user’ traffic. In other words, not only the fiber architecture but also a single wavelength channel is shared between users connected to a PON. It makes GPON more cost-effective in several ways compared with other FTTH technologies. The broadcast nature of the network naturally allows for the deployment of television services such as CATV and IPTV.

The optical power splitter used in GPON is defined to have a maximum split ratio of 1:128 so expenses are shared between a huge amount of users In practice, the maximum allowed number is limited by the link budget which basically boils down to the amount of optical losses introduced by the power splitter. A typical deployed split factor is 1:32; a result of a trade-off between distance between the home and the splitter and the number of homes passed. A frequently used option by operators is to split in sub-stages such that the network is deployed more efficiently and is more robust to bandwidth growth. In that case, splitters with smaller split ratios are used in intermediate stages.

The GPON standard is issued by the ITU under ITU G.984 and several amendments have been made. The line rates are 2.5 Gbps and 1.25 Gbps in the downstream and upstream directions, respectively. The GPON data packets are sent time-division multiplexed (TDM) onto the network and the total available bandwidth is shared following the dynamic bandwidth assignment (DBA) protocol. It has concurrencies with the Gigabit Ethernet PTP wavelength allocation scheme because the 1310, 1490 and 1550-nm channels are occupied in GPON for upstream, downstream, and CATV overlay transmission. The GPON line cards typically hold 8 OLT ports and the number of line cards per chassis can be well above 10. It is clear that several 1000’s of users can be served by a single OLT; however, one has to work with high oversubscription factors to be able to offer high bandwidth connectivity.

Cable operators (MSOs) or other types of RF service providers are looking at FTTH as an attractive option to upgrade their network. The operator can replace its active copper based network by fiber without having to change networking technology. For example, DOCSIS can be transported transparently over fiber. The impact is therefore low at the central office and at the user side when introducing FTTH since the active equipment does not change. The term RF-over-Glass (RFoG) refers to the bi-directional optical transport technology that allows such scenario. One of the major advantages of RFoG is the extremely clean upstream channel since the ingress noise only originates from a single user and only when data is transmitted. Naturally, FTTH allows any other kind of migration scenario at the MSO.

The fiber architecture is identical to TDM PON (BPON, EPON, GPON) architectures that have a 1:N power splitter in the outside plant. As a result, a cost of a single fiber is shared between multiple homes, which translates into sharing the return path receiver at the CMTS. In principle, the maximum number of homes per splitter is bounded by the amount of optical losses that can be tolerated in the network. However, the most common deployed split factor is 1:32 (or: 17.5-dB loss) to find a balance between transmission distance and network performance. Shorter transmission distances allow for higher split ratios.

The Society of Cable Communications Engineers (SCTE) issued a recommendation on RFoG in 2010 that got approved by the American National Standard Institute (ANSI) early 2011: the ANSI/SCTE 174 2010 recommendation. It provides the specifications to implement the RFoG physical layer using 2 different electrical modulation schemes, that is, a R-ONU vendor may choose for amplitude or frequency modulation (AM; FM). The wavelength allocation plan is equal in both cases; the downstream wavelength is fixed to 1550 nm, and the upstream wavelength may be either 1310 nm or 1610 nm. The latter depends on the network deployment scenario. A traditional cable operator or multiple service operator (MSO) may want to deploy FTTH in a legacy hybrid fiber-coax (HFC) network. In such scenario, an overlay with PTP Ethernet or GPON is not likely to occur and therefore the 1310 nm wavelength may be used. In most other cases, the 1610 nm is preferred to allow for overlay or for unbundling/open access purposes. A common issue is the optical beat interference that can be resolved by adopting a specific type of scheduling to not allow randomness in the usage of one or more RF upstream channels for data transmission.

With the advent of FTTH, the home subscriber is connected to digital Internet services on a daily basis by using desktop computers, laptops or mobile devices. On the other hand, it is eminent that, at least for the time being, legacy analogue television services are also broadcasted to the home. The replacement time of televisions is much slower than networked devices. The term CATV-overlay refers to the simultaneous transmission of analogue CATV signals and digital data signals on separate optical carriers. The gateway is then required to filter both signals and to treat them independently. It is important to note that CATV-overlay can be applied to any common data transport network such as PTP Ethernet, GPON, and WDM PON.

CATV-overlay can be realized in any kind of fiber architecture, i.e. point-to-point (PTP) or point-to-multi point (PON). The major implementation differences are found at the head-end side and at the outside plant. In PTP, the CATV signals need to be coupled into each individual fiber that runs to each home and so an equal amount of wavelength division multiplexing (WDM) filters are required. When considering a power splitter in PON, as in GPON, the CATV-signals are coupled into the single fiber running to each splitter. The signals are then automatically broadcasted to the connected homes. When considering a wavelength filter in PON, as in WDM PON, a similar action occurs at the central office; however, additional filtering and coupling stages are required to broadcast the CATV signals to the homes. The latter can be avoided when the operator decides to deploy a second separate CATV network, which may also apply to PTP fiber architectures.

After generating the common CATV signals using standard equipment, these are modulated onto an optical carrier. The 1550 nm is typically used. An optical amplifier then amplifies this optical signal so it can be power-divided and distributed over many fibers. This is possible because CATV is a broadcast signal thus not requiring any communication with the central office. Typically, several 1000’s of users can be served by a single CATV transmitter stage.

With fiber-to-the-home (FTTH) as the main driver, the abundant availability of bandwidth in the local loop presents the next challenge for network operators: how to distribute Internet protocol (IP) services to devices inside the user premises. In-home networking technologies are being developed in the slip stream of FTTH as they are readily offering Gigabit capabilities. The key is to achieve a high satisfaction of a customer that is using a compelling service. Network reliability and broadband are therefore focus points when selecting a suitable in-home technology. On the other hand, remote management and troubleshooting are very important from an operational point of view. Most currently available technologies are copper-based; however, fiber-in-the-home is receiving much attention nowadays. Being either glass or plastic based, optical fiber is the only cabling that is allowed to be placed next to power line circuits because of specific characteristics: it is invariant to electro-magnetic interference (EMI) nor has emission of EMI

The in-home network may have or may use point-to-point (PTP) or point-to-multi point (PTMP) architectures to offer multiple connectivity outlets per home. In the PTMP case, a single cable is split at an intermediate node that is either active, i.e. requires powering, or passive. The PTMP architecture follows either a bus or a tree-and-branch configuration. Well-known PTP versus PON arguments also hold in the residential space. In brownfield, that is legacy, situations, most homes are not prepared for in-home networking. Typically, a single COAX connection exists to a television, the power line circuit has a particular architecture, and perhaps some have installed CAT5 to several rooms. Plastic optical fiber (POF) is considered as a viable and commercially attractive alternative if the legacy copper plant is not sufficient. For example, a POF PON in-home network leads to a low connector count at the residential gateway, uses a passive splitting node, and provides lowest cable count throughout the home.

Several industry groups such as HomePlug Powerline Alliance, HomeGrid Forum, HomePNA Alliance, and MoC Alliance are promoting specific, and often competing, in-home networking technologies. Most could be grouped according to their targeted physical medium like coax, power line, or twisted pair. Recent developments are towards a homogeneous support of all available media, which in some cases include optical fiber (POF, SMF). The requirements are high since the user expects a similar quality of service (QoS) and quality of experience (QoE) throughout the home, independent of its location and means of connectivity. Regarding POF, bodies such as ETSI, ITU, and the German VDE are active in standardization activities. Several chipset vendors are offering a Gigabit solution, which is a promising and attractive development for the near future.

With fiber-to-the-home (FTTH) as the main driver, the abundant availability of bandwidth in the local loop presents the next challenge for network operators: how to distribute Internet protocol (IP) services to devices inside the user premises. In-home networking technologies are being developed in the slip stream of FTTH as they are readily offering Gigabit capabilities. The key is to achieve a high satisfaction of a customer that is using a compelling service. Network reliability and broadband are therefore focus points when selecting a suitable in-home technology. On the other hand, remote management and troubleshooting are very important from an operational point of view. Most currently available technologies are copper-based; however, fiber-in-the-home is receiving much attention nowadays. Being either glass or plastic based, optical fiber is the only cabling that is allowed to be placed next to power line circuits because of specific characteristics: it is invariant to electro-magnetic interference (EMI) nor has emission of EMI.

FTTH -What it means to a Common Man:-

Only one Optical Fiber Cable will reach to the home instead of multiple copper cables for services such as Telephone,Broadband Internet Wired and Wireless,IPTV & Cable TV, Telemedicine Other TCPIP based applications like remote surveillance, remote home control etc 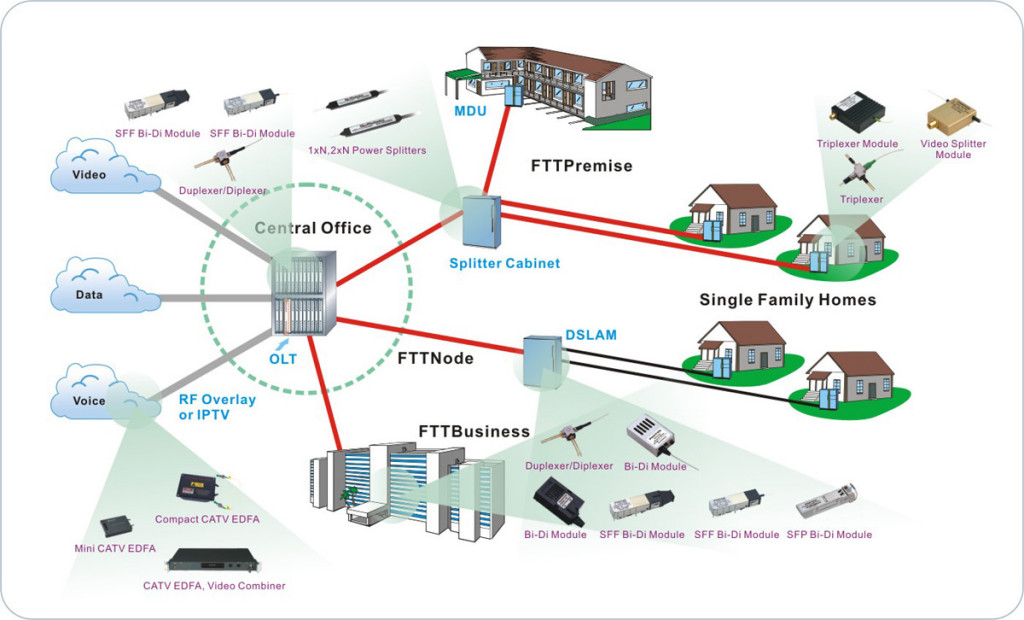 FTTx has grown from its initial FTTN (fiber to the node) to FTTB (fiber to the building) to FTTC (fiber to the curb) and now to FTTH (fiber to the home). Fiber optic communication is becoming the future. The all-optic network is going to be the framework of any industry.

The deployment of optical fiber in the metro/access, the continuing demand for upgrading networks to accommodate rapidly increasing bandwidth requirements and FTTH is the ultimate solution for end user customers.

SHIVAM IT SOLUTIONS is a dynamic organization, providing end-to-end solutions in ..
View More..

An automatic fire alarm system is designed to detect the unwanted presence of fi ..
View More..

AMC FOR COMPUTERS One realizes the value of an AMC (Annual Maintenance Contract) ..
View More..